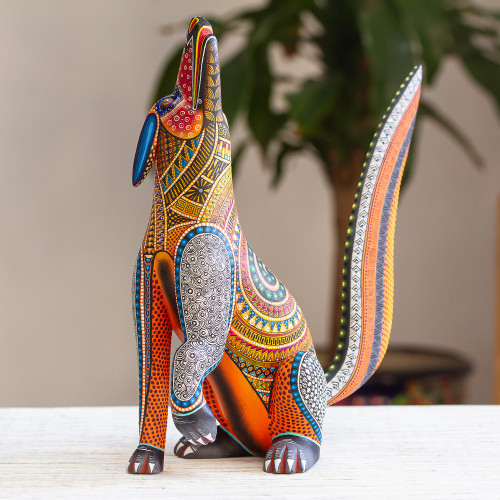 SKU: 383953
On a hot summer evening, a coyote lifts his head to howl at the moon. He raises one paw and holds his bushy tail aloft in this elegant animal portrait. By Manuel Cruz, the sculpture is a Mexican alebrije. The image is carved by hand of copal wood in the style of Oaxaca and meticulously painted by hand with tiny brushes. The finer details are created using a maguey thorn instead of a brush.

The alebrije tradition originated with Mexico City artisan Pedro Linares (1906-1992). When he was 30, he became ill and fell into a coma. While he was unconscious, he dreamed he was caught between the land of the living and the dead, a place populated with creatures whose body parts belonged to different animals. The beings repeatedly cried, 'Alebrije!' When he was well, Linares recreated these fanciful figures in papier mache. His work became famous and inspired artisans in the state of Oaxaca, who began crafting alebrijes of wood.

The wood branch dictates the final form, thus size and shapes can vary slightly. Thus, each alebrije is an authentic work of Mexican folk art.

Lily of the Incas